Influence of dust deposition and light intensity on yield and some agro-physiologic characteristics of chickpea (Cicer arietinum L.) in dry conditions

Introduction
Dust creates fine particulate matter and industrial and urban pollutants including factories of cement, gypsum, stone crasher, flour, daily winnowing of grain storage silos, heavy and light machinery traffic on dirt roads, car smoke and burning oil derivatives, power plants, etc. The dust damages the plants in various forms. The first damage the photosynthetic system by entering through the pores, and then by deposition on the leaf surface, reducing the light reached to the leaf, reducing the amount of photosynthetic pigments, changing the leaf temperature, and reducing the quantum yield, reducing the assimilation and closing stomata, exacerbated fungal and bacterial activity, pests and diseases, and ultimately reduce growth and yield. The amount of damage to the plant depends on the type of plant, cultivar, leaf area characteristics, the growth stage of the dust on the leaf surface, the type of dust and wind speed, the amount of dust thickness on the leaf, and the irrigation regime. Accordingly, the simulation of the effect of dust deposition and the reduction of light intensity due to it and their interactions on the growth and yield of chickpea cultivar Bivanich was performed as the dominant cultivar in the region.

Materials and Methods
This experiment was carried out to investigate the effect of dust and light intensity on yield and some physiological and agronomic characteristics of chickpea cv. Bivanich, at the Research Field, Campus of Agriculture and Natural Resources, Razi University, Kermanshah, Iran in 2016-2017. Experiment was Factorial based on randomized complete block design with three replications. Factors included light intensity (100, 75, 50, 25 and 0% light intensity) and dust deposition at flowering onset and no dust deposition. Sowing date was in late March 2016 in dryland with 25 cm line spacing and 13.5 cm inter-plant spacing in 6 lines with 3 m plots long. Shading was applied with plastic wrap fasteners that were 1 cm wide. The amount of chlorophylls a, b, total and carotenoides and soluble carbohydrates were investigated in mid grain filling. Yield traits and components of grain yield were studied at physiological maturity. The water requirement and water use efficiency were calculated for both total dry matter and grain yield. The data were analyzed by SAS software and the means were compared with LSD at 5% probability level. 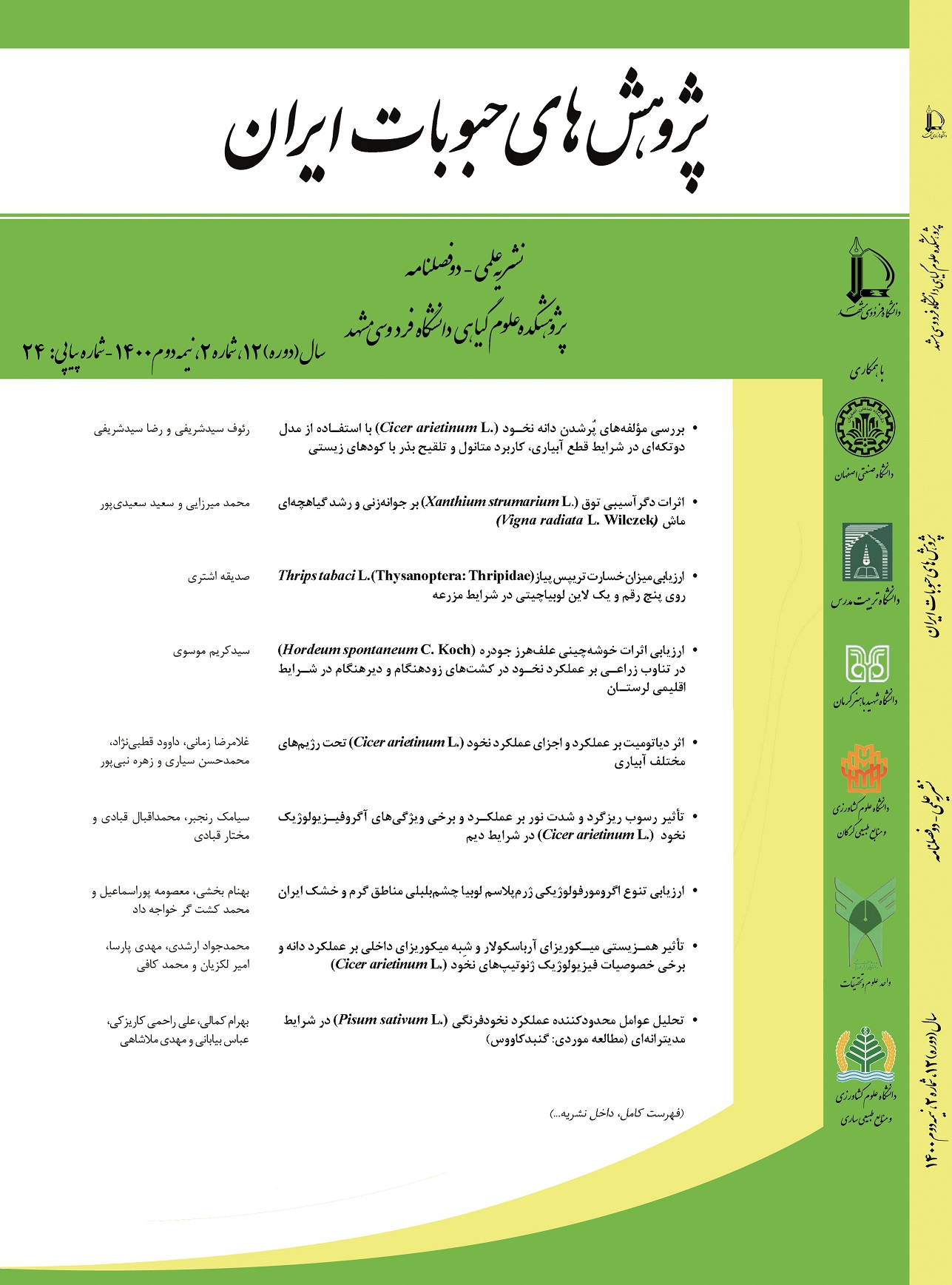